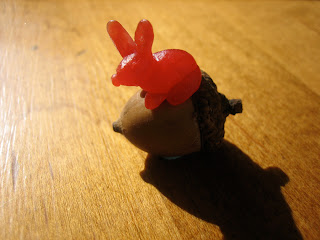 For a snack I set out a bowl of cherries and some of those little cheeses that come wrapped in red wax. About 1/2 hour later when I passed through the kitchen I was surprised to see that my daughter had made a slew of these tiny wax figures. I was shocked that they were not only adorable, but they are TINY. Creativity just pours out of children as easily as their tears. I remember being like that too, as a child. What happened? Four years of art school happened followed by a couple of artistic careers. I learned the “rules” of art, but lost the passion and spontaneous fun of it. Since leaving my career and spending so much time with children I find those rules are loosening up. I have been slowly regaining a love of making things, but I still have a long way to go. As for my children, I try very hard not inflict my mold on them. Which is difficult for someone who has such strong opinions of what is good. 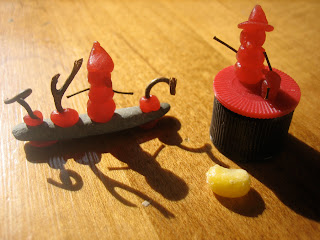 I put a kernel of corn there to show you how small these guys are. She used the stems from the cherries to make these little plants and the snow people's arms. I love them. 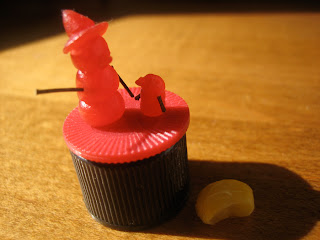 The snow baby is half the size of the corn kernel! It's crazy, I would have just thrown the wax away. She made the base out of a game chip and a bottle top. We adults would call this recycled or repurposed because we need reasons for doing this, right? But children just do it.
Posted by Eve at 1:20 PM 13 comments: 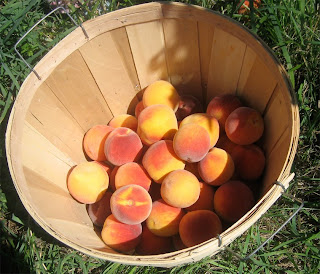 We went peach picking and I thought I would have plenty of peaches left over from our initial feasting to make some ginger/peach jam, but we ate them all. There were a lot of peaches too, but they are all gone.
What did I do with all those peaches? Most we just ate as they were. I did manage a few peachy dishes though. Here are a couple of really good ones. 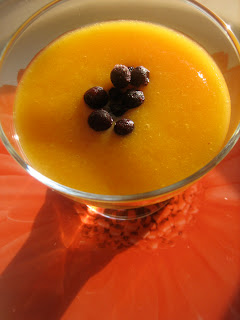 Chilled Fruit Soup
I had this at a restaurant in Mystic, Conn. a few weeks ago and loved it. I have craved it ever since. I think this is why I wanted to go peach picking in the first place, to get really fresh peaches for this soup. 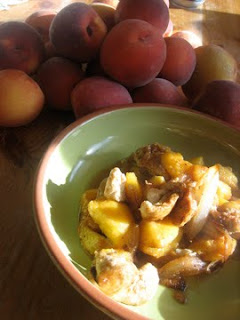 Chicken with Peaches
This one was my own invention. I cooked it with Vidalia Onions and wrapped it up in warm tortillas with sharp white cheddar. A really tasty concoction.
Posted by Eve at 2:02 PM 1 comment: