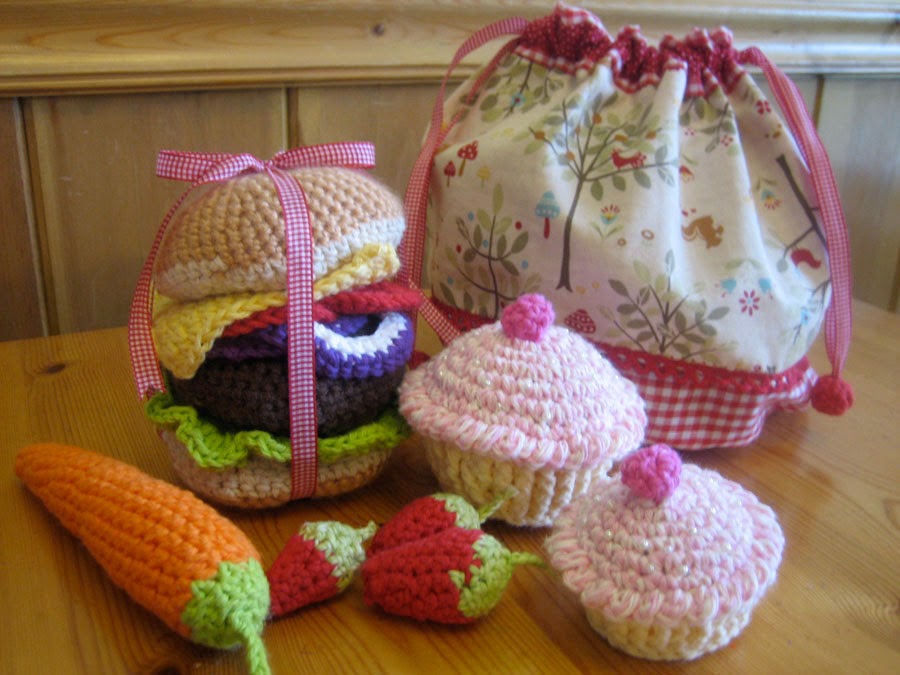 I really want to talk to you of Springtime, birds and bright colors popping up out of the ground. But I can't because here in NY, right now...it is snowing! Not just a few flurries, it's coming down fast in big clumps.

Instead, to satisfy my need for the cute and colorful I will show you this gift that I crocheted for a little friend. I also made a cotton lunch sack to store it in when not being played with using one of my favorite japanese fabrics.
It evokes a day that I am eagerly awaiting. A day of blue sky, warm sun and pretty picnic.
Posted by Eve at 3:28 PM 2 comments: 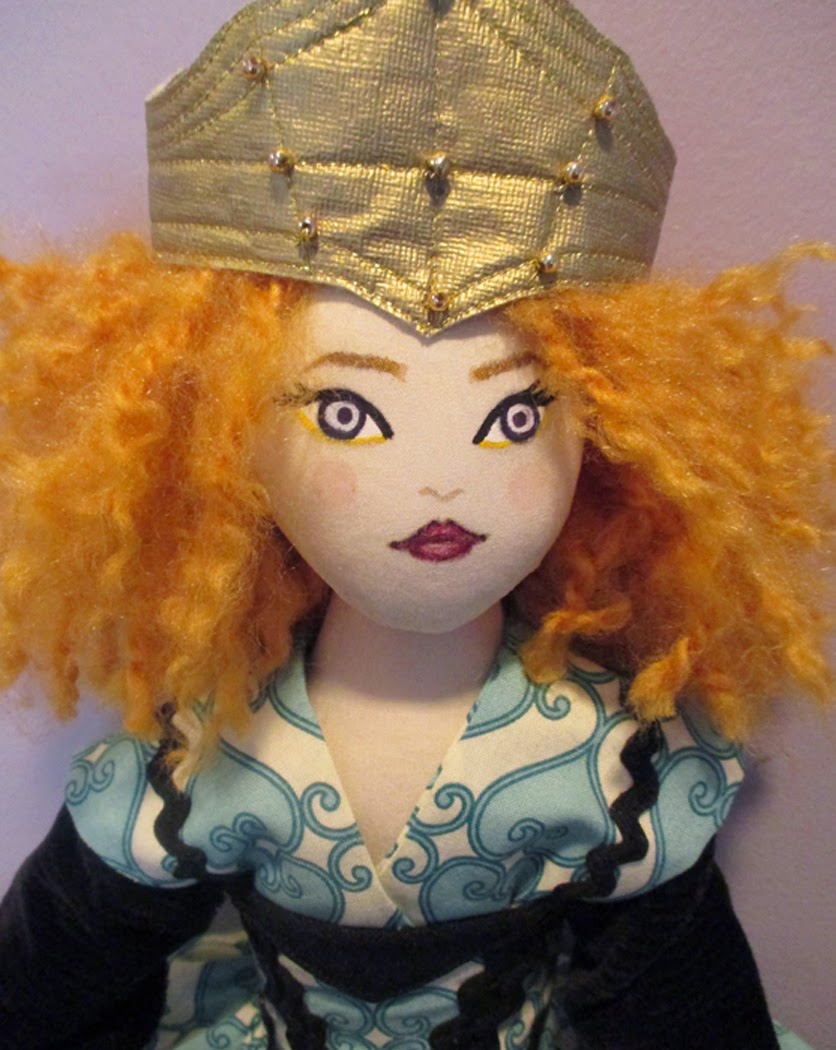 The nice person who purchased my MAd Alice doll commissioned me to make her a companion doll. I have been itching to make another Alice, all I needed was this fresh kick in the pants to actually do it. She suggested I make Queen Alice from 'Through the Looking Glass'. I picked fabric and trims that evoke a playing card, chess game feel but that didn't scream it. I wanted her crown to be too big for her, for her eyes to be piercing like a cat, but not obvious cat eyes. 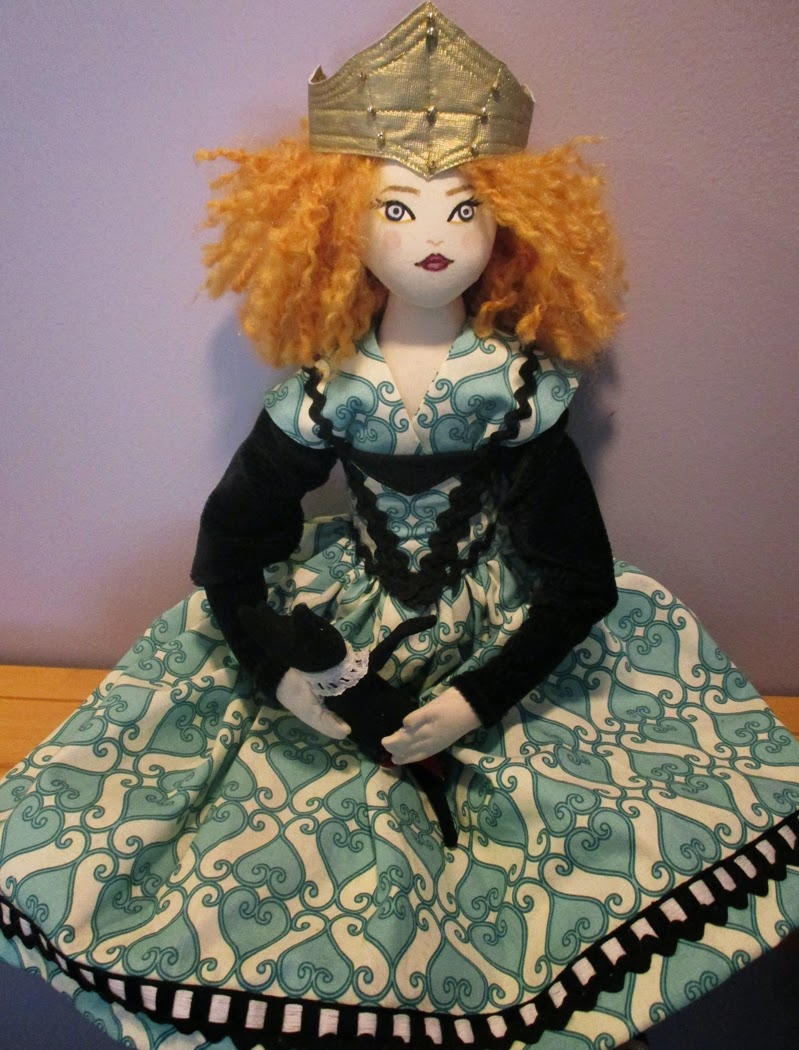 This doll went through a couple of major changes before she finished up looking like this. First she had platinum blonde hair in a very uptight up-do twist.  She also has a full length gown. She looked very royal, very much a queen. But she wasn't playful or childlike in any way. So, I took off the fancy hair and went with a crazy bright curly head instead. That did the trick. Immediately she became younger and much more fun. After the adventure Alice goes through to reach the other side of the chess board she should be at least a little messy. 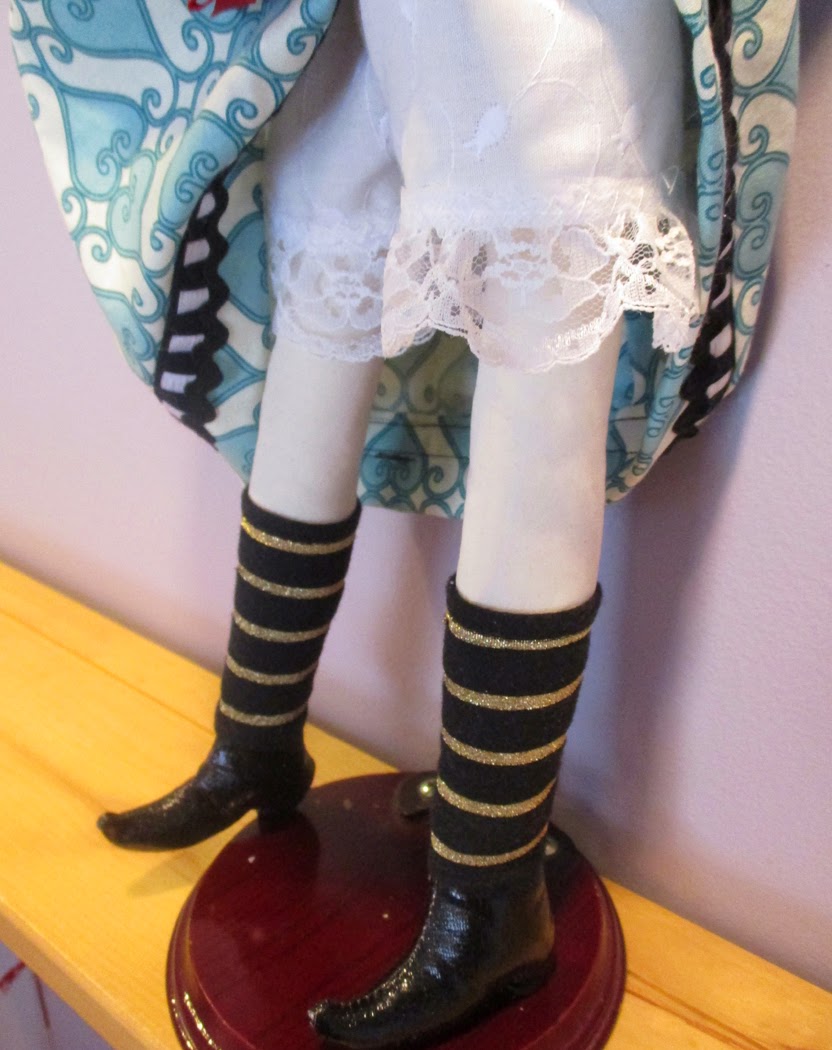 Next to go was the gown. I cut it to tea length to show off stripy leg warmers and a flash of ruffled bloomer. I was pretty happy with her at this point. I thought she was finished. 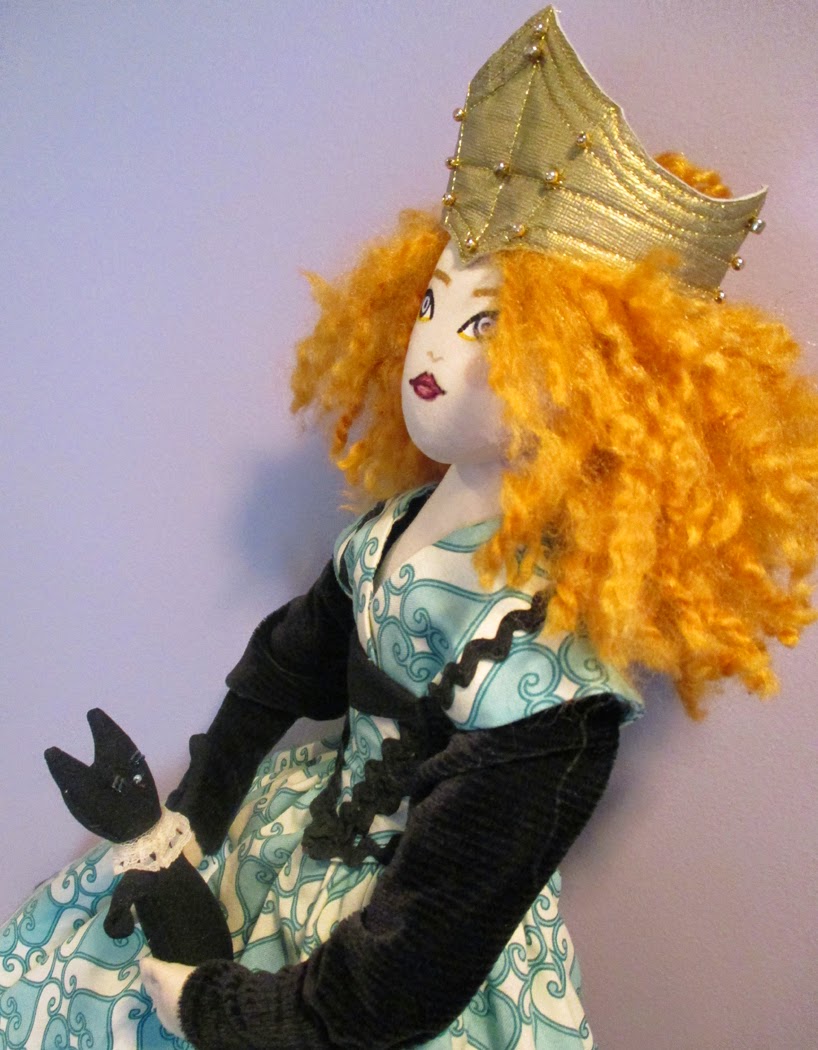 Then my daughter mentioned how Alice shook The Red Queen into the black kitten at the end of the story. I added the kitten. It adds to the story, but doesn't interfere with the look of the doll. 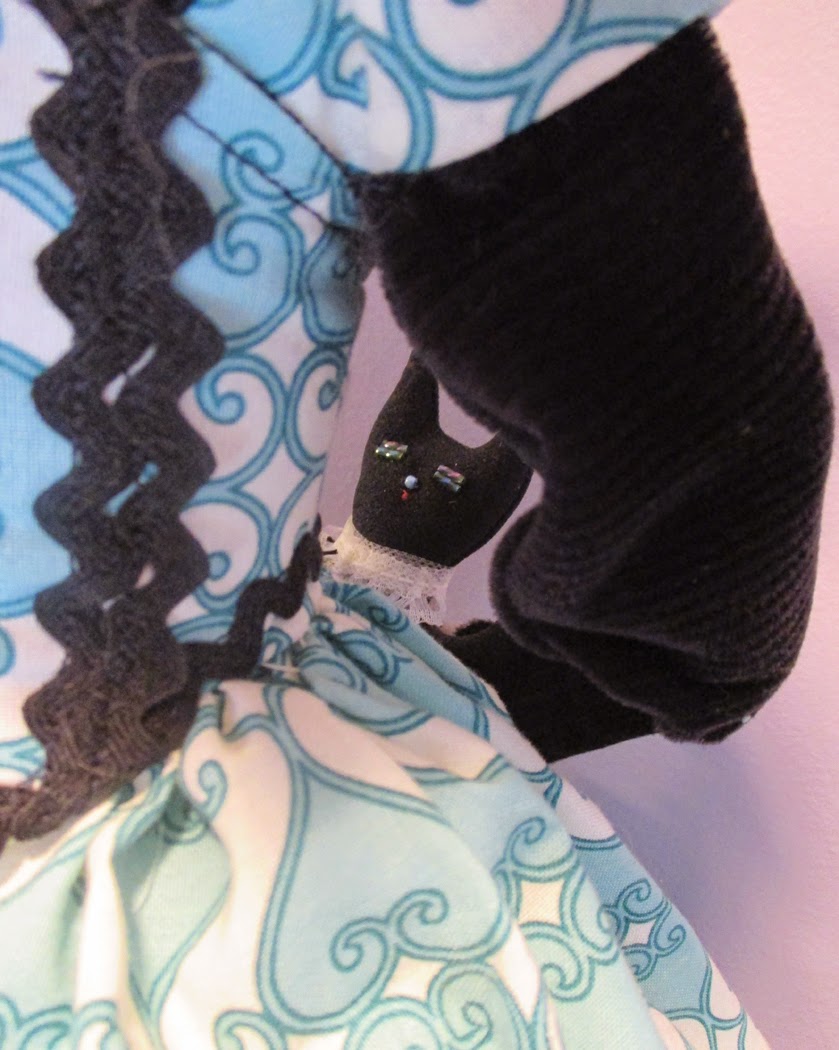 `And as for you,' she went on, turning fiercly upon the Red Queen, who she considered as the cause of all the mischief -- but the Queen was no longer at her side -- she had suddenly dwindled down to the size of a little doll, and was now on the table, merrily running round and round after her own shawl, which was trailing behind her.
At any other time, Alice would have felt surprised at this, but she was far too much excited to be surprised at anything now. `As for you,' she repeated, catching hold of the little creature in the very act of jumping over a bottle which had just lighted upon the table, `I'll shake you into a kitten, that I will!'
She took her off the table as she spoke, and shook her backwards and forwards with all her might.
The Red Queen made no resistance whatever; only her face grew very small, and her eyes got large and green: and still, as Alice went on shaking her, she kept on growing shorter -- and fatter -- and softer -- and rounder -- and -- 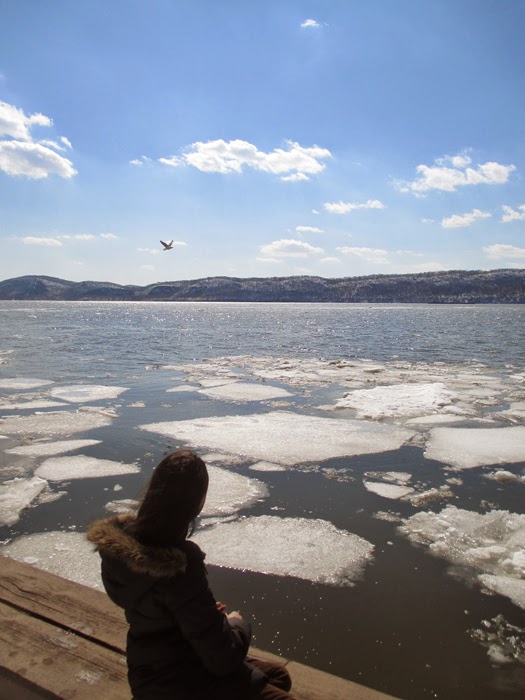 Last week we went down by the Hudson River to take a walk. The water was frozen and was sticking up in sharp slabs almost onto the land. It was amazing. You could actually walk on the river, a river of large green pointed vertical slabs of ice. Unfortunately, I didn't have my camera with me. I have been thinking about how amazing it was and waiting for a day when I could return to take pictures. Today was that day. We were free, the sun was shining, so we went back down to the river with a winter picnic.

But, when we got to the river's edge the ice was gone. What ice that was left was swiftly floating downstream. Instead of feeling disappointed that I wouldn't see that ice again until next year I was excited because Spring is coming!