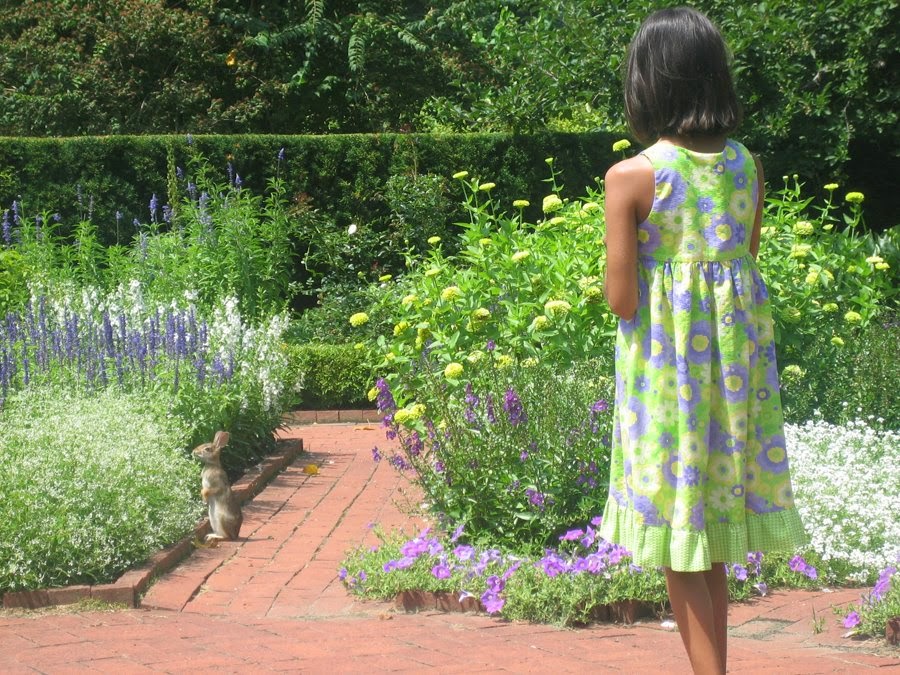 Through all the fogs through
all earth's wintry skies

I scent the spring, I feel
the eternal air

Of life in bird & tree & brook
and moss-

And strength to hang with nails
upon Thy Cross.


-Lilias Trotter (from A Passion for the Impossible)

*the photo: We were at The NY Botanical Garden. My daughter inched closer and closer to a little brown rabbit who just stood there for the longest time nibbling on a plant. He seemed oblivious to us. He was straight out of a Beatrix Potter story, all that was missing was his little blue jacket. 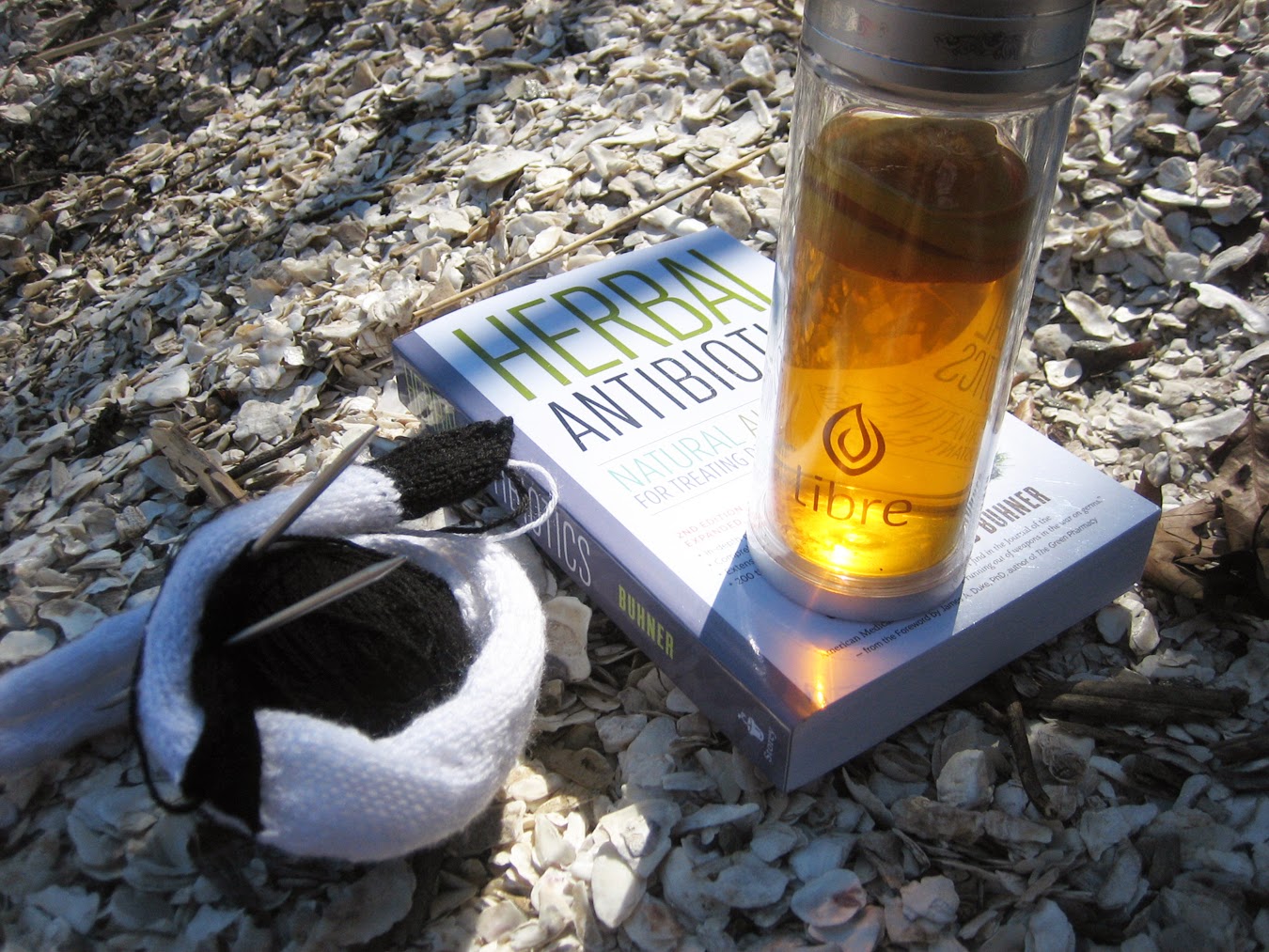 My husband wanted to go looking for drift wood to decorate the bathroom with. I took my new things along. My newest book has arrived (Herbal Antibiotics) and I couldn't wait to dive right into it. I brought the new project I am currently knitting. I carried these things over large rocks, over thousands of oyster shells, and under low tree branches and I didn't even use them. Instead I collected lots of pretty shells and stared at The Hudson River, which was extra sparkly.

At least I did use my new Libre tea glass. I picked up this nifty gadget a couple of weeks ago at the NYC Tea and Coffee Festival. It's a pretty nice thing to have if you are particular about your tea. I like to keep my tea tasting like tea, just tea. I can always taste the plastic or metal that containers are made of.  The Libre has a glass interior which doesn't taint the tea. It has a tea infuser top for loose tea, you flip the bottle upside down to brew. The only drawback is that the tea doesn't stay hot for long. 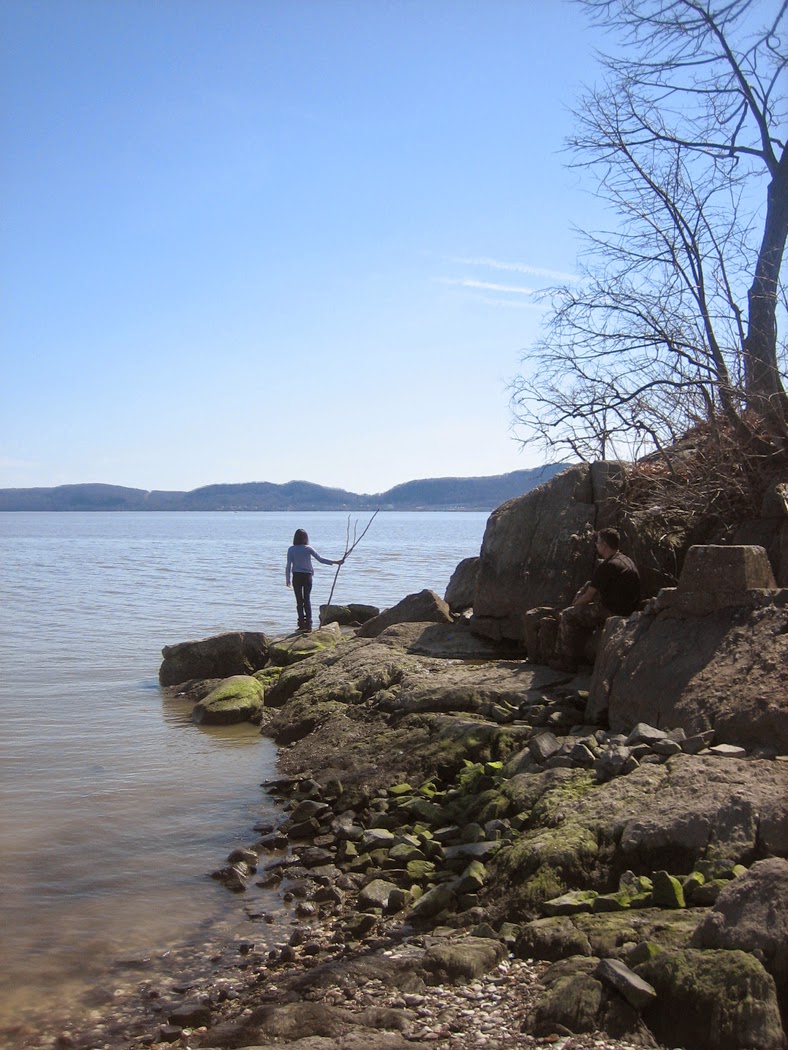 My child found yet another stick/tree branch that needed to come home with us. My husband found one too, a gorgeous red branch. 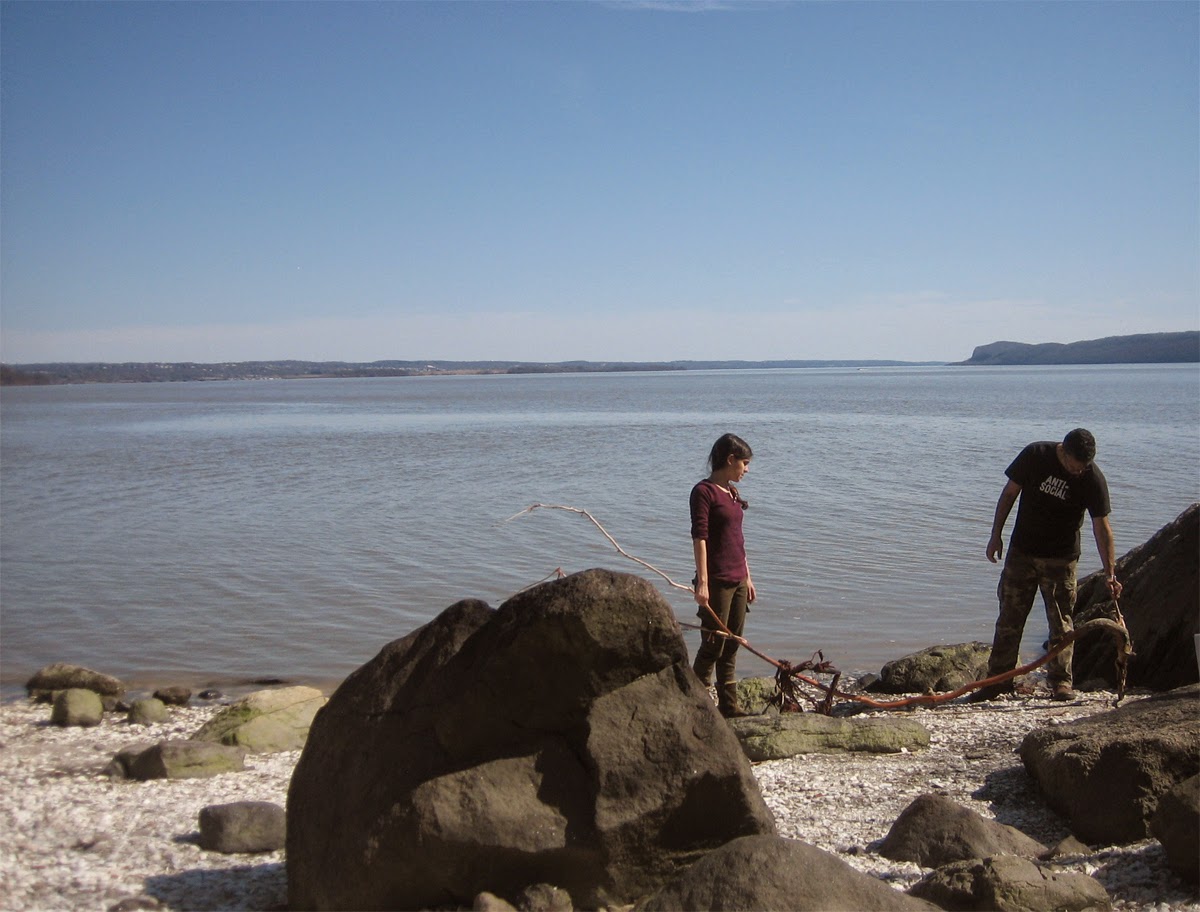 Husband and daughter contemplated how they could fit it into the car.
I looks like we'll be going back...with a saw.
I hope wherever you are that you can find the beauty that was put there just for you.
Posted by Eve at 12:56 PM 4 comments: 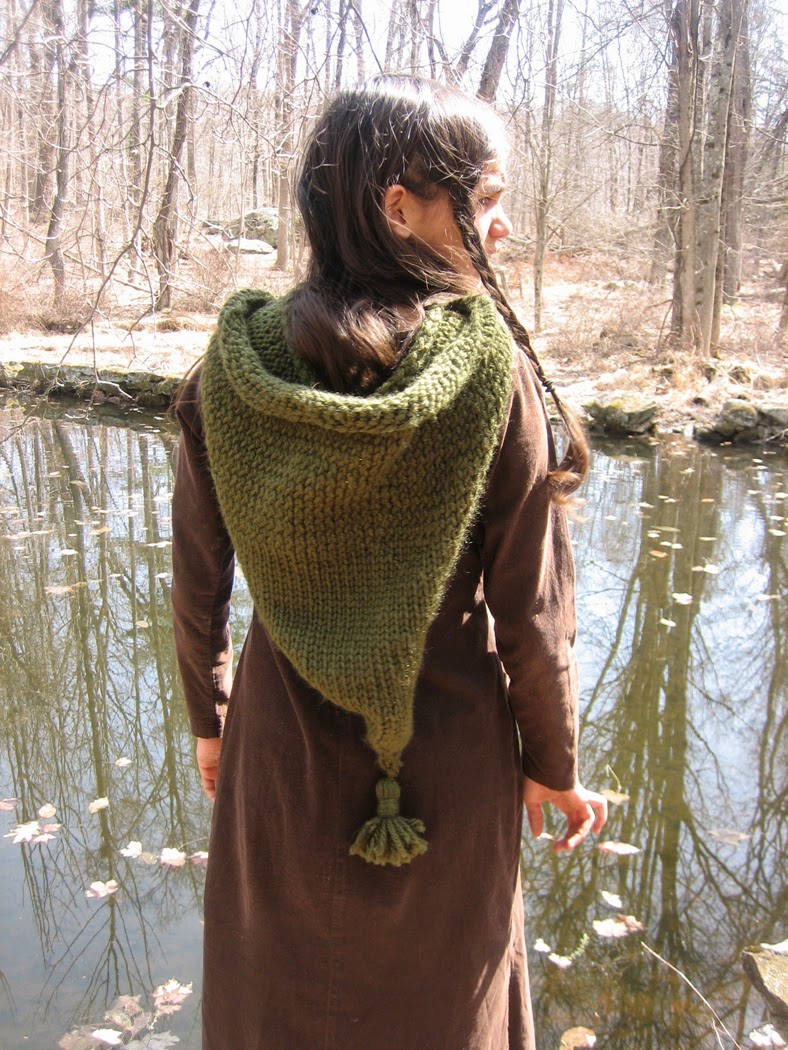 My daughter has been knitting for around six years, the exact amount of time I have been knitting. She wanted to learn, so I learned so I could teach her. It all started with this book. Although she knits and crochets quite a bit, she never used patterns...until this hood. 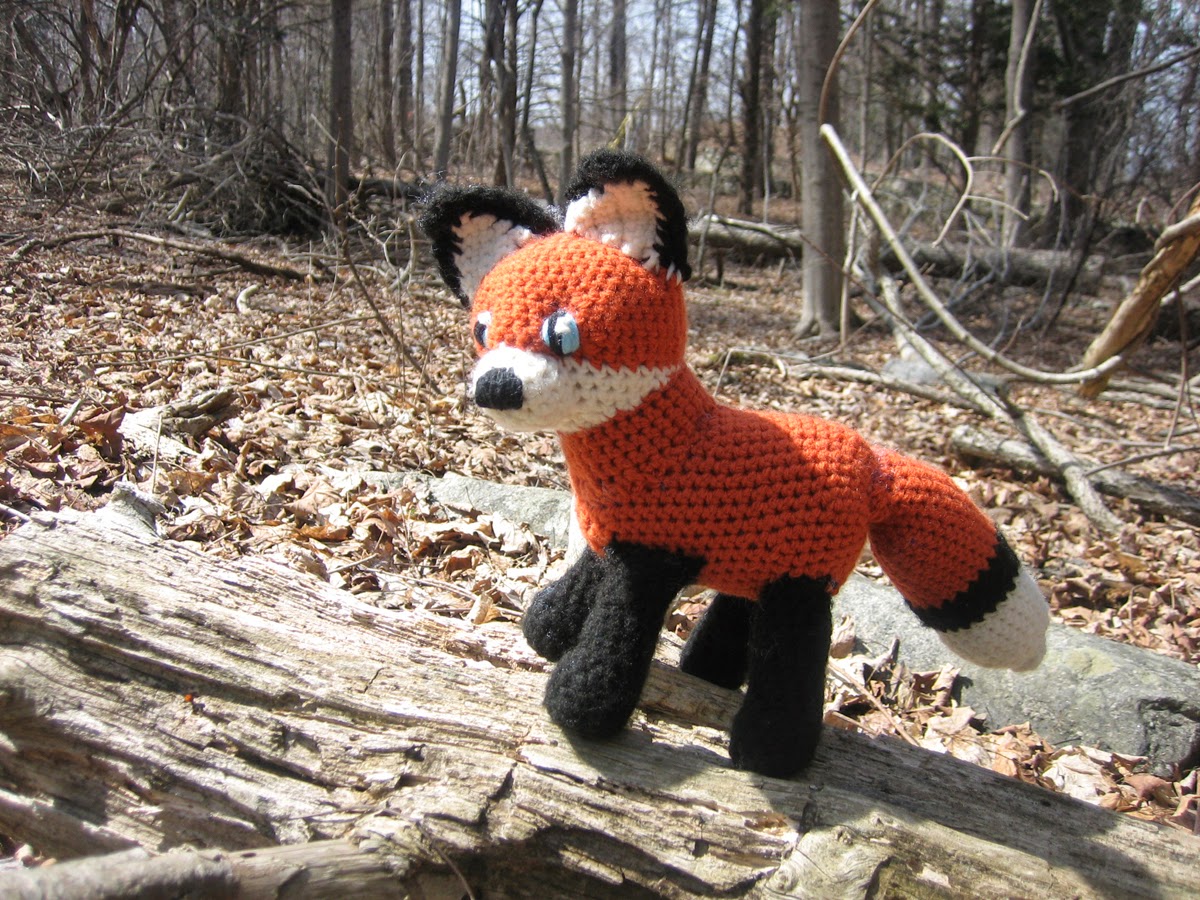 She usually gets an idea of what she wants and just goes to it.  She wanted a fox, so she made this. She doesn't plan it out. She just starts crocheting and as she says, "feels" what to do.
I can do that with food and fabric, but not with yarn. 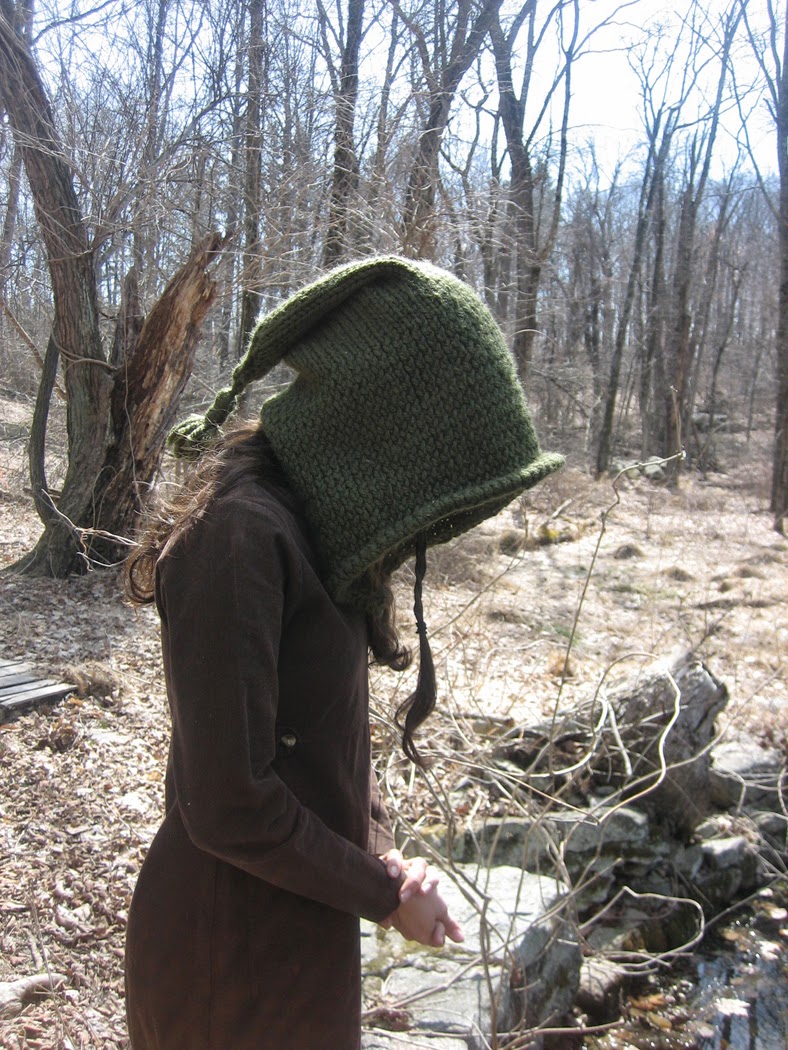 Over the years I have suggested that she learn to read and follow a pattern. She never wanted to.  No need, no interest, why do it? Until the book Woodland Knits arrived. She flipped through it and saw this hood.

"I'm going to make this hood in green.", she said.

She ordered the yarn, bought double pointed needles and the circular set that it needed and knocked it out in a couple of days. First time on DPNs and circular. She also altered it, "I didn't want it so long, so I shortened it and added a tassel." Oh, first time for a tassel too.
When the interest is there, learning is comes naturally and is self motivated. 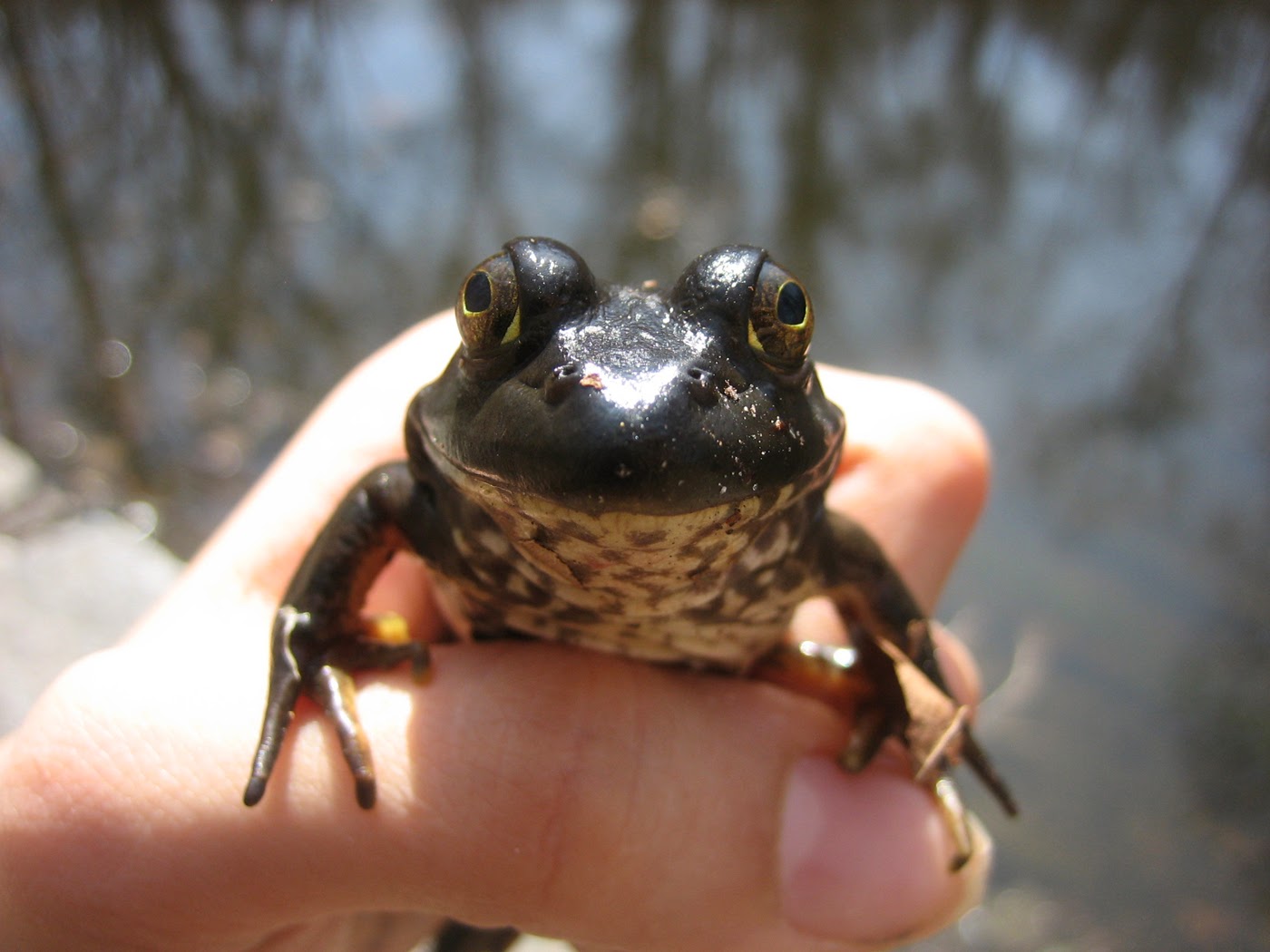 Today we caught our first frog (and a few crayfish as well).
So for me, it's officially Spring! 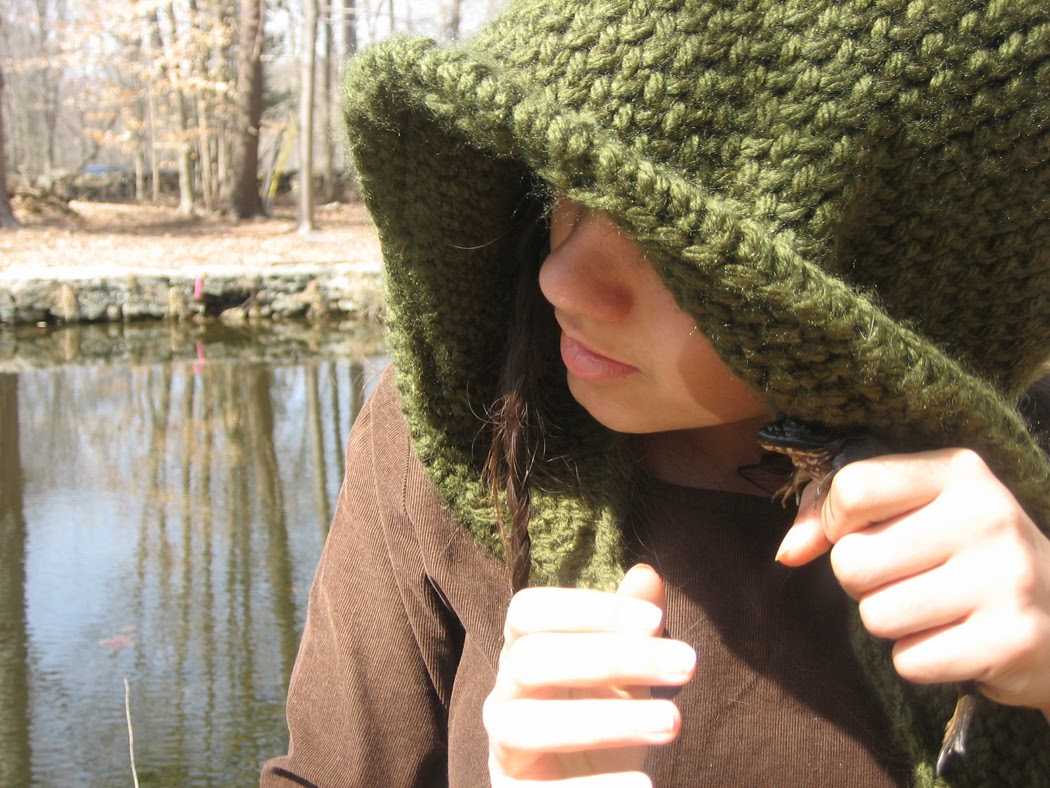 Listen to the frog. Yep- he says, "It's definitely spring. Now put me down."