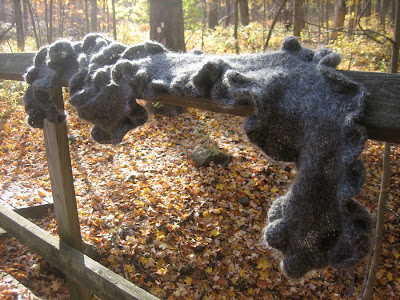 While at the beach this past summer my daughter found a huge piece of seaweed. It was about as tall as she was. It was wide and flat in the middle but the edges were all frilled like ruffles. She began draping in and wrapping it around different parts of her body, making clothes out of it. It was so pretty I decided that when fall came I would make a scarf that looked just like it. I now have my seaweed scarf. My daughter didn’t know anything about my plan.  So, when I finished it I asked her what she thought it looked like. Her reply, “It’s seaweed! But, it’s the wrong color.”. 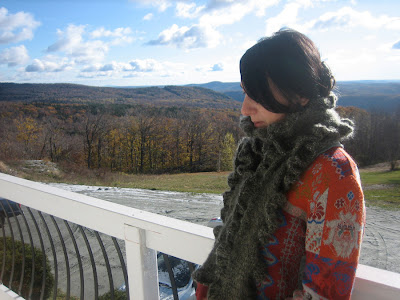 Yeah, she’s right, the real seaweed was browner, mine is more of a dull, mossy green because that’s what I want. I knitted the scarf and then crocheted around the edges to get the ruffled effect. Keeping true to the real seaweed it has one wide end and one thin end. When wound around my neck a couple of times it makes a nice warm ruff.
Posted by Eve at 3:15 PM