Adventures of an Elf

Yes, I know it has been quite a long time since my last blog post. I have been rather preoccupied with "real" life. Life is interesting, life is unpredictable. Life gets in the way of  blogging, blogging will never get in the way of  my life. There is so much to do, to see, to try. Sometimes I admit...I just forget to blog. The longer I stay away, the harder it is to come back. Today I'd like to recap a little of the past month while the memories are fresh. It has been a very exciting and fun time. 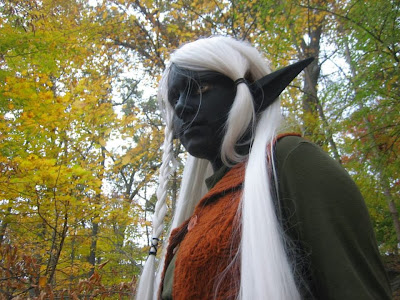 My daughter has been writing a story about a dark elf/Drow who because of complicated circumstances is being raised by her wood elf grandfather. This week she finally gathered all the necessary pieces to dress up as her elf counterpart. The autumn colors made for a perfect elf walk and photoshoot. It seems like only yesterday that she was a tiny girl devising a way to attach hair to her Frodo feet. She insisted on going to church that way, barefoot in very cold weather. We compromised with flip flops. She was born with a wonderful, brave, adventurous spirit and many times I have had to look away and just let her do things that worried me rather than crush her spirit.

A year ago she began earnestly asking if I would let her go on a mission trip to Cambodia.  My husband had been to Cambodia in 2011. He met some amazing people there whom we have become very close with. They run a church and orphanage in the city of Phnom Phen called Water of Life and they are doing miraculous things in their community.

When my husband first went it was scary to think about the strange and dangerous things he was doing. Twenty-six hours of travel each way, oppressive weather, strange food, anything goes traffic, trips into the jungle and dangerous slums. Our friend Holly is a missionary who runs a home for vulnerable woman and girls called House of Refuge. Sometimes girls come to her for help, sometimes she goes out and finds them. Holly took my husband to a horrible building used for human trafficking where she and her girls frequently go to talk to girls and offer them a way out. The people are so poor that many of these girls have been sold by their own families.  My husband was horrified at the misery and filth of the place. One of the girls they spoke with that very day did come to live with Holly and her girls.

Knowing these things and then hearing my 13 year old daughter tell me how much she wanted to go of course made me anxious!  My little girl! On the other side of the world!

She started having dreams that she was going to Cambodia, that she was there with Holly.  In my gut I knew then that she would go.  If God was setting this up for her, then she would go. How could I keep her from something that meant so much to her? To hold her back might even kill the fire in her forever. 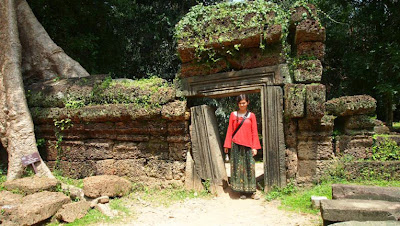 My husband was eager to go back to Cambodia and reconnect with the friends he had made. When a group from church planned another trip he took my daughter with them.   The children there need money for food, medicine and vitamins. But they also need mentors, adults that they trust who can guide them and give them hope for a better life. We stay connected with them through the internet and are hoping to arrange more visits going both ways. 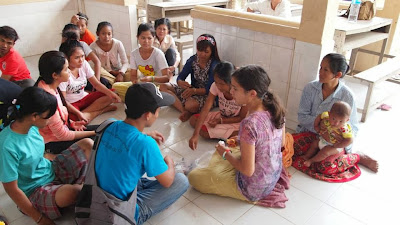 Our team ended up at three different orphanages. My daughter taught jewelry making to the older girls while another woman did a craft with the little ones.  They were long, hard, hot days but she did a great job. That's her in the purple shirt. Dara, the boy in blue translated for her. 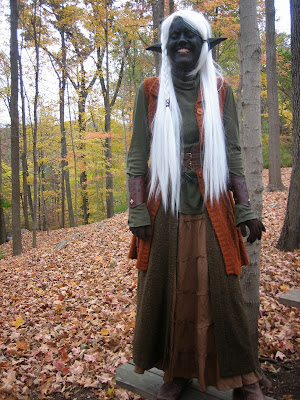 Only after they came home did I hear about the crazy stuff.  How they had to stay at the Water of Life orphanage instead of the hotel one night because of terror threats against Americans. How their tuk-tuk got stuck in the mud and almost tipped over. How they were threatened with bodily harm and spiritual curses when they tried to help a young street hustler. How my adventuring elf went for a joy ride on the back of Holly's motor bike. She said it was like Indiana Jones. "We drove through a crazy market that had huge pieces of meat hanging from hooks and chickens were running out of our way!" On their way home they got caught in a flash flood. The water was up to their thighs so the moto's engine flooded. They had to push/carry the moto for two miles. When she came home I unpacked her boots, they were soaking wet and had mold growing over them.
When people ask my daughter what her favorite part of the trip was she always says,
"THE FLOOD!"
Posted by Eve at 7:28 PM