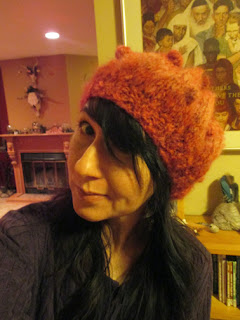 After that fussy cabled sweater I had the urge to knit something without a pattern or plan. What began as a wide scarf ended up a slouchy hat! As I was knitting I realized that I have a wide large scarf from last year that looks pretty much the same.

I ripped it out and started a hat.  I wasn't having enough fun with it, so I started throwing in some random bobbles to make it interesting. As soon as it was finished I tried it on and took this selfie. Which doesn't do the yarn justice at all. 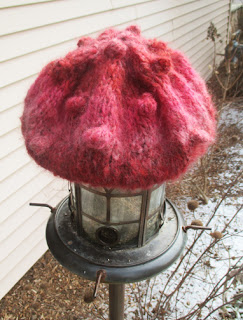 In need of some natural light, I went outside and popped it on the bird feeder. You can see the delicious color and the bumpy bobbles much better.