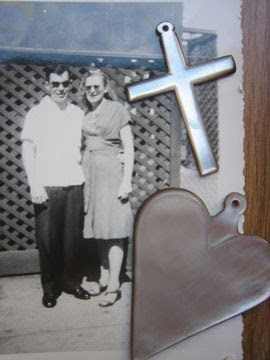 My grandmother was buried today. She passed on over the weekend at 91 yrs old. The more I think about her, the more I want to share her life with others. She was a second mother to me. Hers was the first home I lived in when I was born and the home I left on my wedding day. It wasn’t until I had children of my own that I realized how patient, tireless and creative she was.

Jean was born to Polish immigrants in Brooklyn in 1918. At 14 yrs old she became a “career girl” to help support the family when her father was out of work. She loved to tell me the story of how her mother had her keep a little of her earnings to buy herself a new hat every week. She always had that twinkle in her eye when she talked about those hats! She married my Hungarian grandfather when she was 27. They saved their money and bought the house in Queens that she would live out the rest of her life in. They bought the house in cash, no mortgage. Grandma Jean nurtured and fed every person and animal that crossed her doorstep. Every Christmas she would gift the local nuns with hand knit shawls “because it gets chilly where they live and they don’t have much money”. She was always entertaining someone, there was a never ending spread of polish or american food on her table. Her garden was bursting with life. She exchanged twigs with her neighbors and ended up with the most beautiful collection of roses growing alongside her pears, cherries and vegetables. Each year she canned her bounty of tomatoes. She knew what it was like to have nothing, so to have this abundance was not work, but joy.

Grandma Jean’s hands were never idle. If there was ever a moment when she was sitting still she would be knitting, crocheting or embroidering. She made jewellery, ceramics and every conceivable home decoration. When I was a child my books, toys and crafts were strewn all over her house. Grandma never fussed, but instead joined in the fun. When I got older and began bringing home my “colorful” friends Grandma didn’t bat an eye, she entertained like they were her friends. She would run out with her cart on wheels to the market and return with all the snacks we could possibly consume. I recall once when some friends needed a place to stay for the night . The friends happened to be a heavy metal band, all boys. She put out the food, laughed and told stories and played cards with them. They all slept on the living room floor with her cozy crocheted blankets. When it was time for them to leave the very big, very loud singer, Moose (who also had a penchant for spitting fire onstage) couldn’t stop praising and hugging his new “grandma”. Jean gave and I took. I am ashamed to admit that I never lifted a finger to help her. She didn’t complain, she was just happy to have me with her.

In recent years when I would go on and on about the great things she did she would shoo me away with a “Come on, I enjoyed it!”. It wasn’t until I had a family of my own to look after that I realized the strength it took to live that kind of life. A simple life of serving others.

The photo is of my grandparents around the time they got married. When my grandfather (who was equally resourceful, creative and amazing) was stationed in Hawaii during WW2 he picked up mother of pearl shells on the beach and carved crosses and hearts for his new bride back home.
Posted by Eve at 3:19 PM