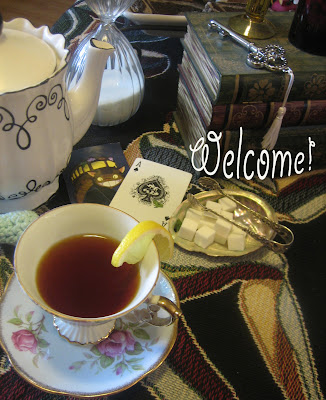 Today I join Vanessa from A Fanciful Twist blog for a
Mad Tea Party!
All text is from from Alice's Adventures in Wonderland.
I was inspired by the court scene from the"Who Stole The Tarts"chapter. With it's tea, tarts, guinea pigs, little sisters and general madness it was a perfect fit for us!
I hope you all enjoy it as much as we did. 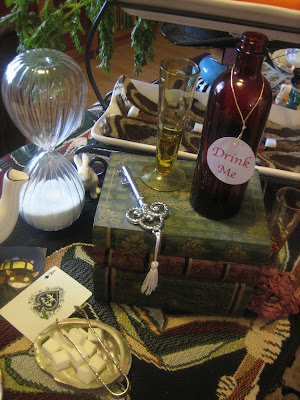 "The Queen of Hearts, she made some tarts, All on a summer day: The Knave of Hearts, he stole those tarts, And took them quite away!" 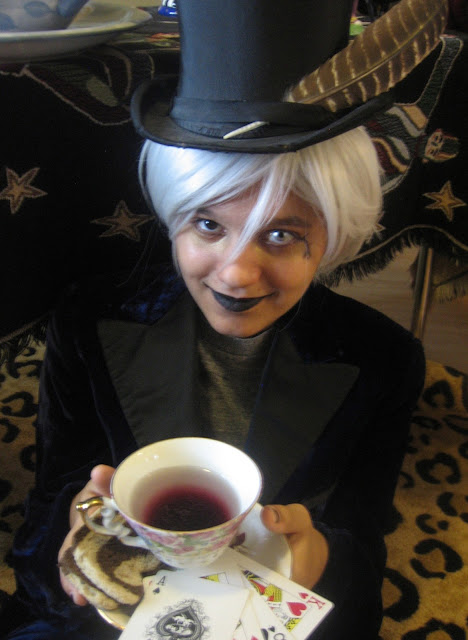 "Call the first witness, "said the King; and The White Rabbit blew three blasts on the trumpet, and called out," First witness!"

The first witness was The Hatter. He came in with a teacup in one hand and a piece of bread and butter in the other. "I beg pardon, your Majesty," he began, "for bringing these in: but I hadn't quite finished my tea when I was sent for." 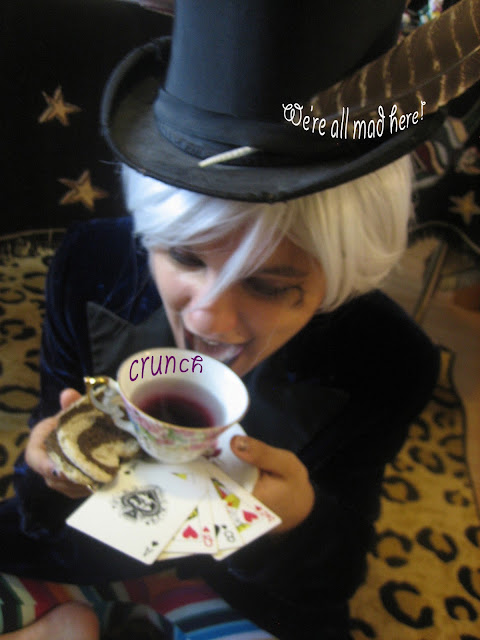 "Give your evidence," said the King; "and don't be nervous, or I'll have you executed on the spot."

This did not seem to encourage the witness at all: he kept shifting from one foot to the other, looking uneasily at the Queen, and in his confusion he bit a large piece out of his teacup instead of the bread and butter. 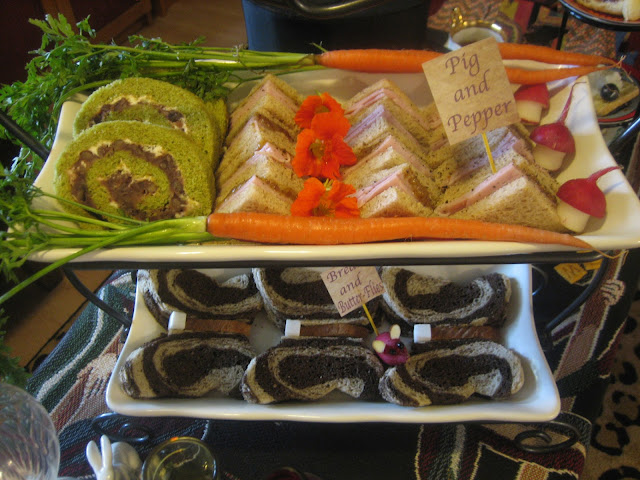 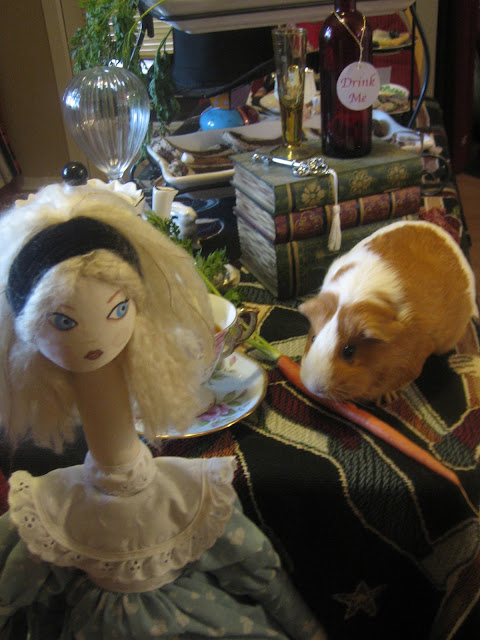 "I wish you wouldn't squeeze so." said the Dormouse, who was sitting next to her. "I can hardly breath."

"You've no right to grow here," said the Dormouse.

"Yes, but I grow at a reasonable pace," said the Dormouse: "not in that ridiculous fashion." 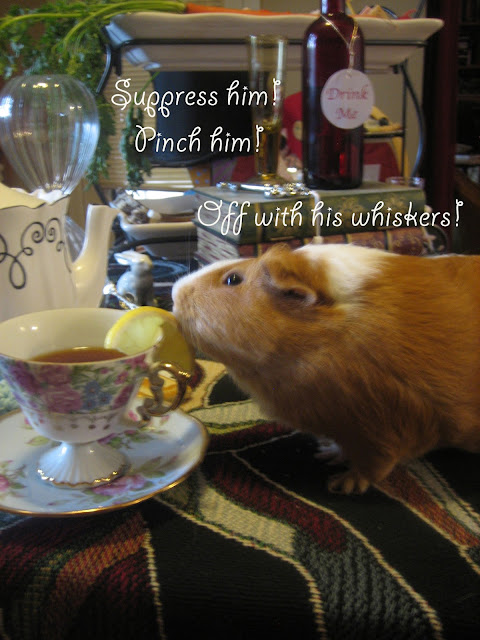 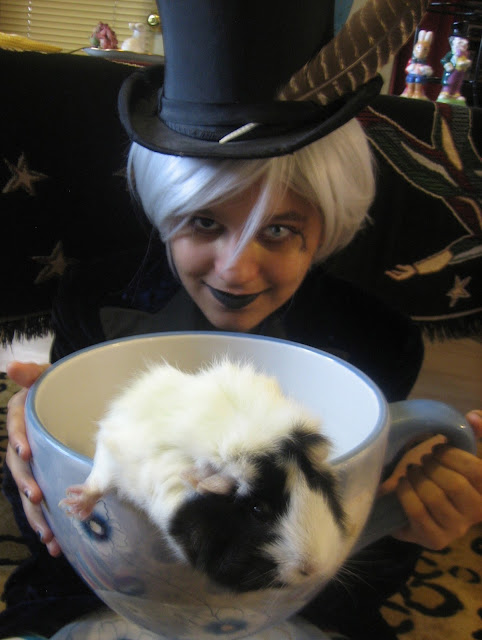 Here one of the guinea pigs cheered, and was immediately suppressed by the officers of the court. 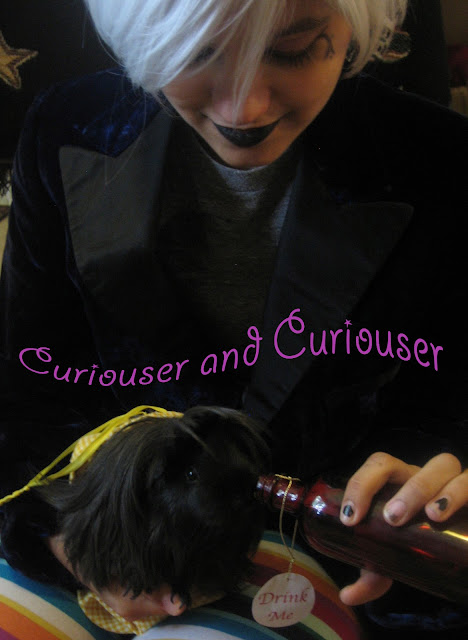 Here the other guinea pig cheered, and was suppressed.
"Come, that finished off the guinea pigs! thought Alice. "Now we shall get on better." 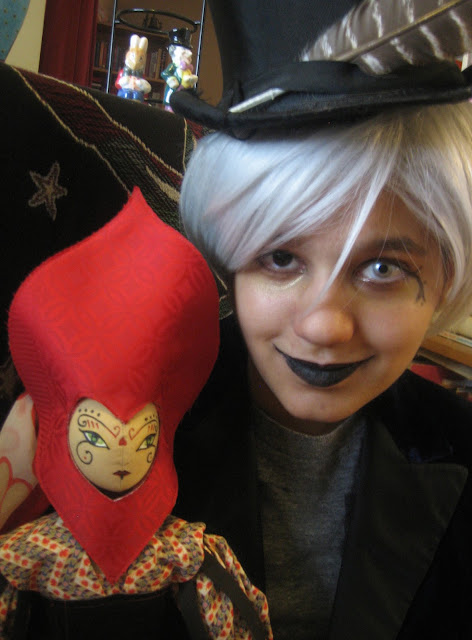 All this time the Queen had never left off staring at the Hatter. "You may go," said the King, and he hurriedly left the court, without even waiting to put on his shoes.

"--and just take his head off outside," the Queen added to one of the officers: but the Hatter was out of sight before the officer could get to the door. 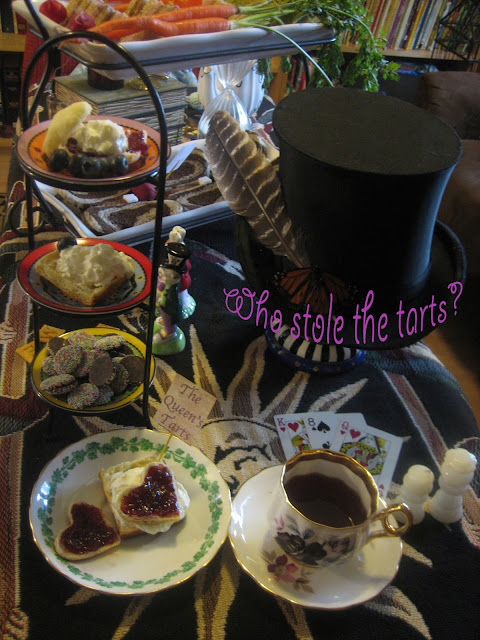 "Why, here they are!" said the King triumphantly, pointing to the tarts on the table. "Nothing can be clearer than that. 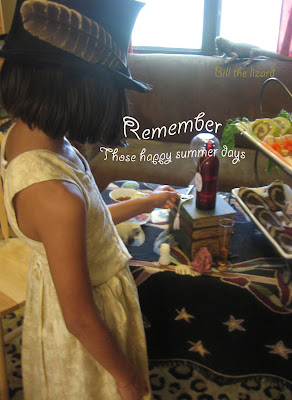 'Wake up, Alice dear!' said her sister; 'Why, what a long sleep you've had!'
'Oh, I've had such a curious dream!' said Alice, and she told her sister, all these strange Adventures of hers; and when she had finished, her sister kissed her, and said,

'It was a curious dream, dear, certainly: but now run in to your tea; it's getting late.'

But her sister sat still just as she left her, leaning her head on her hand, watching the setting sun, and thinking of little Alice and all her wonderful Adventures, till she too began dreaming...

She pictured to herself how this same little sister of hers would, in the after-time, be herself a grown woman; and how she would keep, through all her riper years, the simple and loving heart of her childhood: and how she would gather about her other little children, and make their eyes bright and eager with many a strange tale, perhaps even with the dream of Wonderland of long ago: and how she would feel with all their simple sorrows, and find a pleasure in all their simple joys, remembering her own child-life, and the happy summer days.
Posted by Eve at 4:54 AM